Travel Guide of Guilin in China by Influencers and Travelers


Guilin is a prefecture-level city in the northeast of China's Guangxi Zhuang Autonomous Region. It is situated on the west bank of the Li River and borders Hunan to the north.


The Best Things to Do and Visit in Guilin

The Elephant Trunk Hill is a hill, landmark and tourist attraction in Guilin, Guangxi, China. It is not only one of the major tourist attractions of Guilin, an international tourist city, but also the symbol of Guilin, which uses elephant trunk mountain and osmanthus flower as its city emblem.

The Reed Flute Cave, also known as "the Palace of Natural Arts," is a landmark and tourist attraction in Guilin, Guangxi, China. The cave got its name from the type of reed growing outside, which can be made into flutes. Reed Flute Cave is filled with a large number of stalactites, stalagmites and other rock formations. Inside, there are more than 70 inscriptions written in ink, which can be dated back as far as 792 AD in the Tang Dynasty. These aged inscriptions tell us that it has been an attraction in Guilin since ancient times. It was rediscovered in the 1940s by a group of refugees fleeing the Japanese troops. Nowadays, multicolored lighting artificially illuminates the cave. 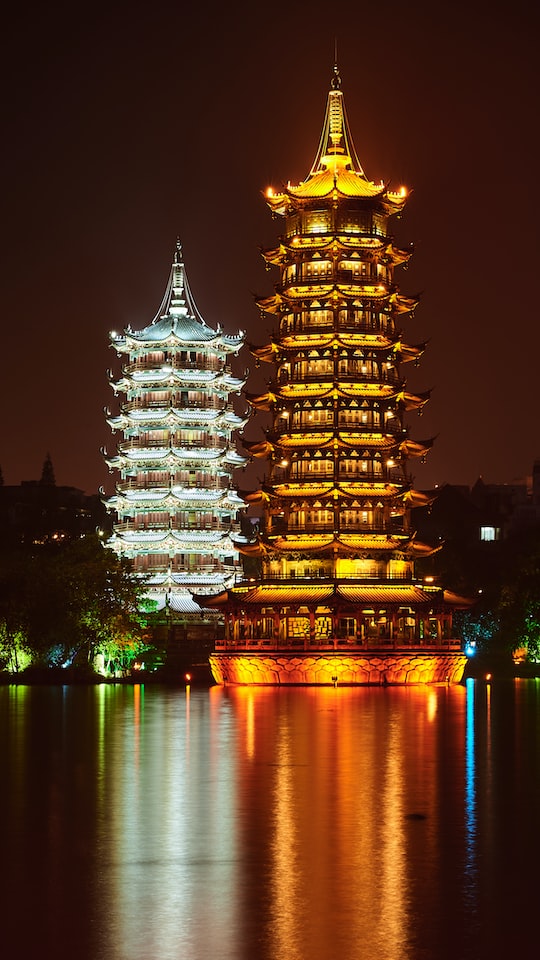 
The Sun and Moon Pagodas are twin pagodas located in Guilin, Guangxi, China. Originally built in the city moat of Guilin during the Tang dynasty, the pagodas were reconstructed in 2001 using historical records as the centerpiece of Riyue Shuangta Cultural Park—–a park themed around the unity of Buddhism, Confucianism, and Taoism.


Book Tours and Activities in Guilin


Discover the best tours and activities around Guilin, China and book your travel experience today with our booking partners

Pictures and Stories of Guilin from Influencers

9 pictures of Guilin from Aaron Greenwood, Bo Kim, William Zhang and other travelers 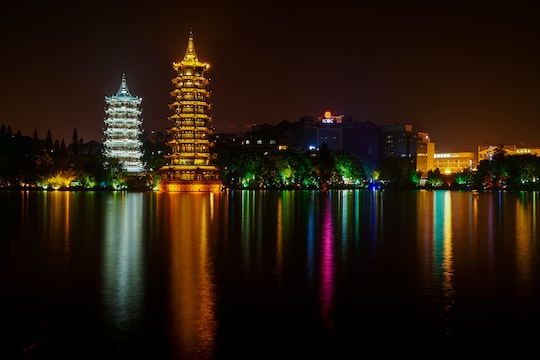 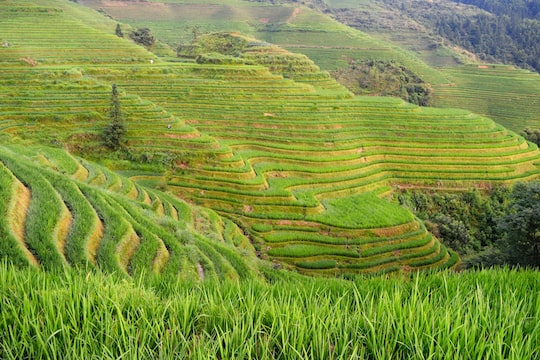 An cloudy day in Guilin Aug 2017 another China site that did not disappoint in spite of the weather, the scale of the terraces is huge, to think that ...click to read more 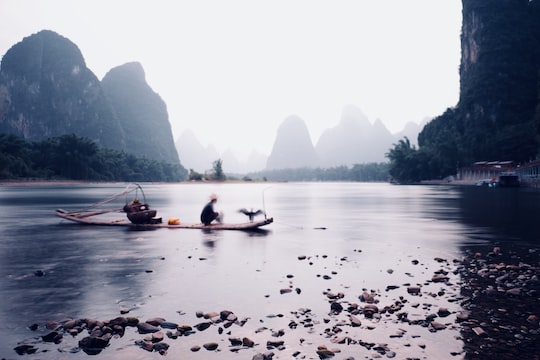 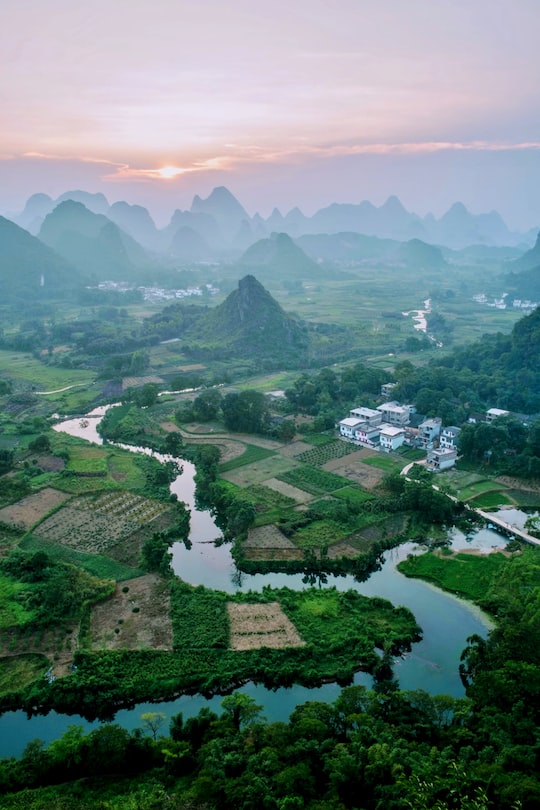 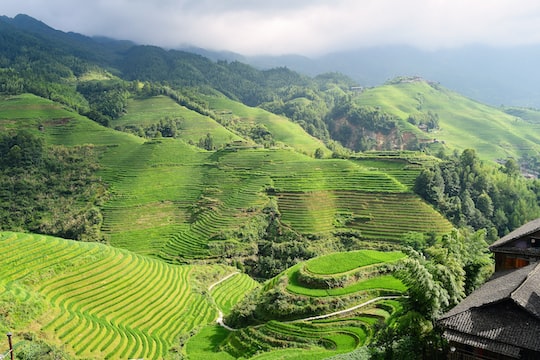 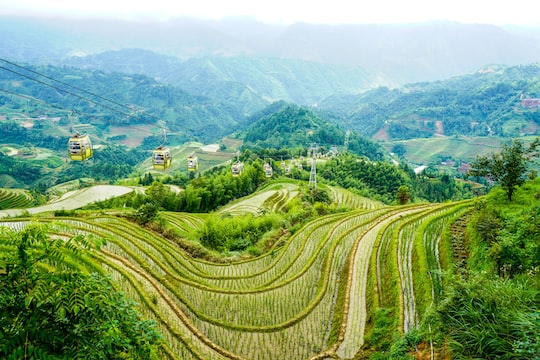 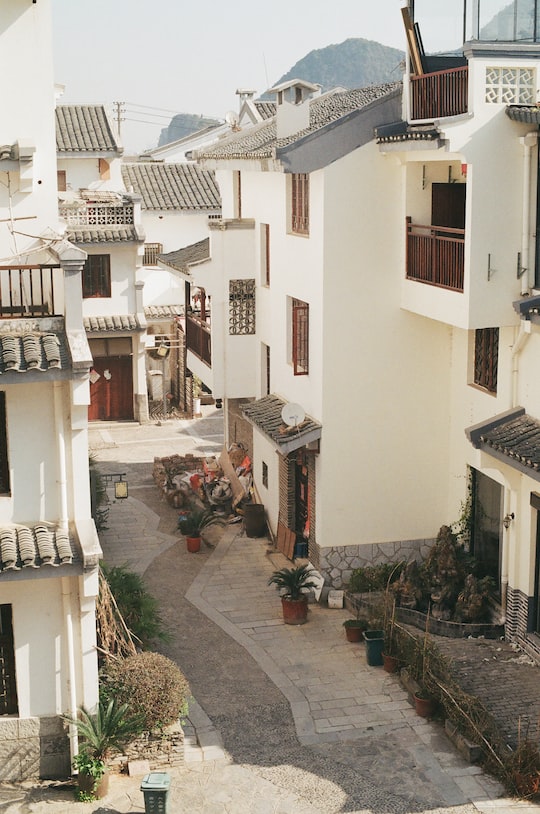 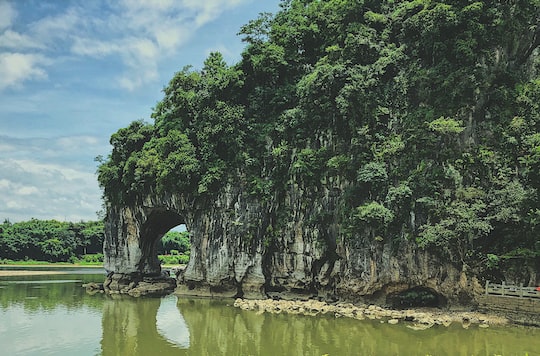 
Why should you visit Guilin ?

Guilin is located in the northeast of the Guangxi region. Founded more than 2000 years ago during the Qin Dynasty, Guilin allowed food to be transported to the provinces of the region through the Ling Canal. In this way, the city became increasingly important to the Guangxi region. Invaded by the Japanese from 1944, the historic landscape was partly destroyed during the occupation. Since 1980, the protection of the city's heritage has been a top priority for the state.

Today, Guilin is one of the most beautiful cities in China and attracts thousands of visitors every year. Surrounded by mountains, rivers and rice fields, the city offers a unique natural landscape to its visitors. According to an old Chinese proverb, it is a true paradise on earth.

Between Guilin and Yangshuo lies the Li River. It is a must-see when you visit Guilin. This stretch of river has inspired many writers and painters from all over the world. It is also featured on the 20 yuan banknotes as it is the pride of the Chinese government.
If you want to enjoy the beauty of the landscape, take a cruise on the Li River.

Don't miss the elephant trunk hill!
Located in the south of Guilin, the hill owes its name to its shape; when you look at it, it looks like an elephant is dipping its trunk into the river to drink some water. Between the elephant's trunk and its body is a rounded cave. Again, its name is inspired by its appearance. It is the cave of the moon in the water. The best time to see this natural wonder is on a full moon evening. The shimmering waves are a magnificent sight.

As you walk up the hill, another cave appears; it is the Elephant's Eye Cave. This is an ideal place to observe the landscape from a height. And at the top is the Puxian Pagoda which looks like a sword handle.

Ten kilometres from the centre of Guilin is Yao Mountain. At more than 900 metres above sea level, it is the highest mountain in the city and its surroundings. In order to climb this mountain, a cable car has been installed. This gives you a view of the natural beauty of the scenery.

There are many other landscapes to discover.

Frequently Asked Questions by Travelers planning a trip to Guilin

How to get Guilin?

To get to Guilin, simply land at Guilin Liangjiang Airport which serves the city.
Alternatively, it is entirely possible to get to Guilin from Hong Kong or Shanghai by high-speed train, or by car.

Where to stay in Guilin?

For accommodation in Guilin, there is something for everyone.
For example, Central Square is a vibrant part of the city with many restaurants, bars, activities and accommodation such as luxury hotels and rentals.

Where to Stay in Guilin

Discover the best hotels around Guilin, China and book your stay today with our booking partner booking.com

Book a Hotel in Guilin